Most respondents also expect that the February Lunar New Year holidays in China will result in delayed transit times and reduced availability of containers.

“We always expect a spike in container shipping demand ahead of Lunar New Year holidays in China as shippers look to ship cargo ahead of factory closures as workers in coastal areas return to families inland, often for extended periods,” said Dr Johannes Schlingmeier, co-founder and CEO, Container xChange.

“Even though it is unclear if China will allow millions of workers to travel for holidays this year due to strict Covid lockdown policies, shippers and forwarders are still expecting output from OEMs to decline significantly next month and are planning accordingly by shipping early.

“This is no doubt a factor in some of the spot freight rate increases out of China we have seen in January.”
The official public holiday for Chinese New Year only lasts a week and is scheduled this year for January 31-February 6. However, in most previous years factory output in China has been impacted for far longer as many workers take extended holidays. 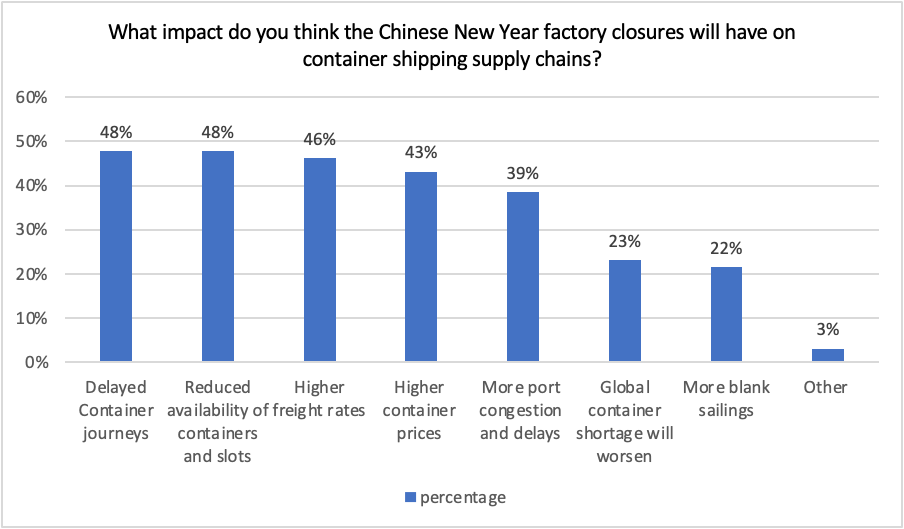 Asked how they were planning for Chinese New Year factory closures by changing container sourcing strategies, 32% of respondents replied, “nothing specific”, 25% said they would make use of Shipper-Owned Containers (SOC) and 24% said they would buy equipment.

Ahead of the Chinese New Year holidays, the average price of a 20 feet container in Shanghai increased from $2718 in December 2021 to $2767 in January 2022, according to Container xChange data.

For a 40 feet high cube container, the average price rose from $5918 in December 2021 to $6030 in January 2022 at the port of Shanghai. Prices have also increased month on month in Ningbo and Shenzhen.

“Predicting the impact of the Chinese New Year holidays in 2022 is rather more difficult than in previous years because China’s policies on internal travel are rather opaque,” said Dr. Johannes Schlingmeier, co-founder and CEO, Container xChange“.

Even if workers are allowed to travel home, it is unknown if they will need to quarantine before they can return to work.
The start of the Beijing Winter Olympics in early February and the possibility of power cuts is further clouding the ability of manufacturers to predict output levels in February.

“There are a lot of uncertainties over the next few months. One potential upside is that if we do have reduced output from China in February, this could allow container lines to get vessel schedules in slightly better order which could improve the equipment availability situation globally and especially in China.”

“The counterpoint to this is, of course, that we could see large backlogs of cargo building up in China which could be a factor at the end of the first quarter and into Q2.”