Shipping alliances have become the big thing for many shipping lines. As the alliances make it possible to have lower prices and offer a larger variety of services. Do you want to know more about three of the major shipping alliances worldwide and their benefits? Then keep reading 👇

Recently, shipping alliances have been in the news:

“Hyundai Merchant Marine (HMM) is to join THE Alliance when its slot charter agreement with 2M expires next April”, according to the Loadstar.

Three major shipping alliances (2M, THE Alliance, and Ocean Alliance) were formed in 2017. They were formed to facilitate two elements that ocean carriers compete on: low prices and broad service coverage. These three alliances account for 80% of the global container market, according to Alphaliner’s ranking of all the shipping lines.

But how do shipping alliances differ from one another, and why did HMM decide to join THE Alliance? Shipping alliances can help carriers facilitate low prices and broad service coverage through economies of scale and economies of scope. The high fixed-cost structure of shipping lines is one of the main arguments for shipping lines to collaborate. A weekly liner service between different ports requires investment in a set of ships. They will sail irrespectively of their utilization rates. Collaboration between carriers, for instance, through a vessel sharing agreement (VSA) can mitigate this risk and increase utilization rates.

Shipping lines are under high pressure to offer low prices to their customers as container transportation. Their business is mainly a commodity since containerization has brought down transport costs.

Ship size significantly increased to mega-ships of more than 20,000 TEUs to generate lower costs per transported container. Variable costs that can be reduced through the usage of shared resources include many things not only ships. But also ports, terminals, and networks. In the end, shipping alliances are tools used to acquire bigger ships together. As well as to share vessels to guarantee high utilization rates. Because substantial cost savings (economies of scale) can only be achieved if partners are willing to collaborate.

Moreover, collaboration helps carriers to improve service offerings to their customers through a more comprehensive global shipping network. Research shows that extending coverage and providing more routes is the most important motivation for participating in strategic alliances. Why? Most shipping companies are stronger in certain areas. This usually happens with a lot of experience and partnerships between carriers. Carriers, who are strong in complementary regions with a broader network, increase service offerings to their customers.

Entering alliances seems to be a good fit for smaller (extended service coverage) and larger shipping lines (rationalization of resources). But, in the end, every carrier makes its own strategic choices. This becomes clear when you look at the different strategies of MSC and their German competitor, Hapag-Lloyd. For a long time, MSC focused on organic growth by acquiring ships rather than shipping firms. It did not engage in alliances until 2015. In contrast, Hapag-Lloyd has been collaborating in partnerships since 1989 and acquired various carriers, but never bought mega-ships. The three major shipping alliances collectively account for 80% of the shipping market. They also include all of the top 10 container lines.

Maersk Line and MSC announced a 10-year vessel sharing agreement starting in 2014. The agreement includes 185 vessels with a capacity of 2.1 million TEUs. Maersk contributes with 110 vessels/ 1.2m TEU capacity. MSC adds 75 vessels/ 900k TEU to the alliance. It is now the biggest one in shipping since Hamburg Süd (part of Maersk) entered. 2M serves 44 regular routes between Europe, Asia, and the US. In the first year alone, Maersk forecasted savings of $350m. HMM partnered up with the 2M alliance in 2017 for a time period of three years. That way to exchange slots and to share or trade surplus capacity.

Launched in 2017 with an initial period of five years COSCO Shipping, OOCL, CMA CGM, and Evergreen just confirmed the extension of the duration to ten years until 2027. The Ocean Alliance includes 330 container ships and an estimated carrying capacity of 3.8m TEUs. It offers a total of 38 different services including 19 transpacific services, 11 services between Asia and Europe (+the Mediterranean), and 4 services between Asia and the Middle East.

THE Alliance: Hapag-Lloyd, ONE, & Yang Ming

Launched in 2017 by Hapag-Lloyd, ONE, and Yang Ming, THE Alliance combines 3.5m TEUs. That is approximately 25% of the global container capacity. On top of that, THE Alliance has also revealed that it will deploy a fleet of 249 ships. Who will connect 76 ports throughout Asia, North Europe, the Mediterranean, North America, Canada, Mexico, Central America, Indian Subcontinent, and the Middle East. In 2019, they “optimized port-pair connections to accommodate customers’ needs of greater reliability and stability in service quality”, the container alliance said. As of April 2020, HMM from South Korea will be a part of THE Alliance which will increase its total capacity by 519,000 TEU and thereby increasing its global market share from 25 to 30%.

How do shipping alliances work? Despite differences between alliances, most work pretty much the same. Main areas of communication and information sharing cover the same areas such as stowage plans, vessel assignment, and scheduling as well as problem-solving. They also openly discuss how to regulate fuel types, environmental issues, operational efficiencies, and engine failures. Additional elements in each shipping alliance include capacity planning, the contribution of each individual carrier, and the specific compensation. Put simply, the more a carrier puts in a shipping alliance in terms of pooled vessels and trade lanes, the more a carrier gets out of it.

Port choice is usually subject to negotiations and can deviate from the choice of one particular member. This is particularly contentious for carriers that have large ownership in container terminals, as vessel sharing partners often have stakes in different container terminals. While alliances have set up joint operational centers to enable closer coordination, best practice sharing is not constituted a norm within such networks and happens mainly on a bilateral basis.

Other types of liner collaboration

The cooperation in shipping alliances covers the utilization of shared resources and covers full integration of service capabilities. It does not cover joint sales, marketing, pricing, or the joint ownership of assets which distinguishes it from other forms of partnerships. The strongest collaborations are mergers and acquisitions or joint ventures. However, sometimes people are still confused over what the differences are between Slot Charter Agreements (SCA) and Vessel Sharing Agreements (VSA):

Slot Charter Agreement (SCA) is a contract between two partners/ shipping lines who buy and sell a specified number of slots for a certain period of time to widen coverage. Hapag-Lloyd, for example, is a slot charterer on the MSC service from South Africa to Europe, according to Shipping and Freight Resource, even though they have their own ships and services on that stretch. Slot charterer act as an independent shipping line, use their own equipment, issue their own bill of lading and the port directly invoices them for their port charges.

A Vessel Sharing Agreement (VSA) is a cooperation between shipping lines to fulfill demand on specific trade lanes through the sharing of vessel space. Vessel sharing agreements are agreements you usually reach between partners within an alliance in order to operate a liner service along specific routes as partners. The space for each partner may vary from port to port and depends on the individual input per company. A Vessel Sharing Agreement is limited to a specific trade-lane. On the other hand, a shipping alliance is a row of VSA’s and is more global of nature. Another form of collaboration between carriers is asset sharing. That’s something we facilitate on Container xChange. We developed a platform that connects container owners and users on a neutral marketplace.

On the platform, you can find partners that reposition their containers from a location with a surplus of containers to a deficit location. Some carriers have bilateral repositioning in place, but Container xChange lets them interchange containers with more than 300 companies including leasing companies, forwarders, and container traders. Some liners even use xChange to find containers when demand exceeds their own capacity. It’s risk-free for shipping lines to join, it helps avoid repositioning costs and allows carriers to downsize their equipment pool.

Asset sharing and shipping alliances have many things in common. And they’re both ways the industry continuously tries to renew itself and keep up with the growing demand for goods worldwide. 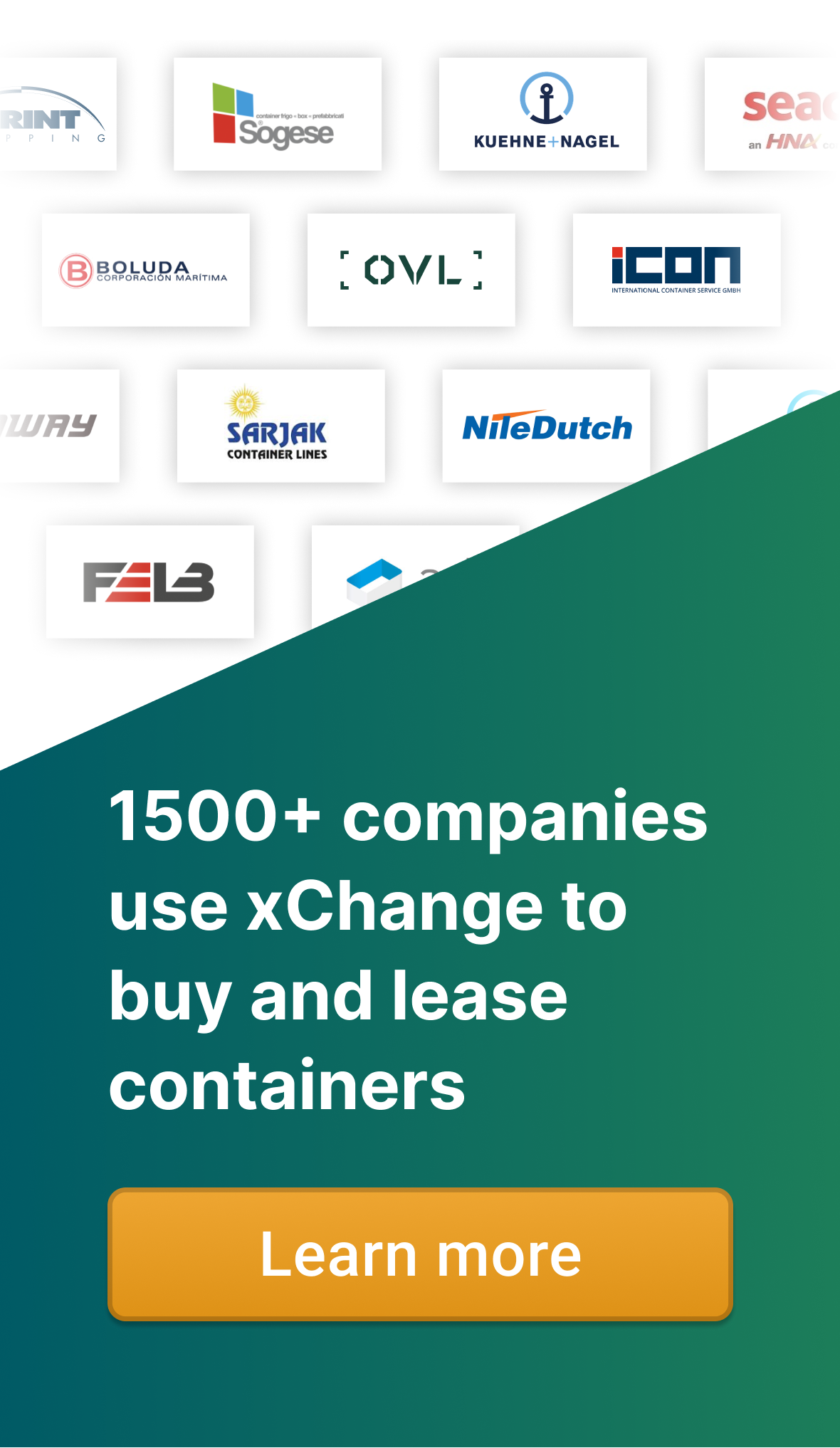